With a distinguished list of recipients that reads like a Who’s Who in the field of seismology, The Harry Fielding Reid Medal is SSA’s highest honor. Originally called The Society Medal before its name change in 2005, the award has celebrated outstanding contributions to seismology or earthquake engineering since 1976.

The Harry Fielding Reid Medal, SSA’s highest honor, is awarded no more than once a year for outstanding contributions in seismology or earthquake engineering.

The Medal may be awarded to any individual with the exception of a member, member-elect or officer of the SSA Board of Directors at the time of the nomination deadline.

The chief nominator must be an SSA member who is eligible to submit a nomination. Any member of SSA may nominate a candidate for this award, with the exception of members of the Reid Medal subcommittee, SSA Board of Directors and SSA Award Encouragement Committee.

A signed nominator disclosure form submitted by the chief nominator must be included with every submission. Click here to complete the Ethics Disclosure Form for Nominators.

The Medal Subcommittee should attempt to ensure that up to but no more than three nominees are put forward for consideration by the Board for the Medal annually. If the subcommittee feels there is no qualified recipient, they will recommend that no award be conferred that year. Any unsuccessful nomination may be considered again in the following year’s award cycle without resubmission of the nomination package if requested by a nominator before 30 September of that year. To be reconsidered in subsequent years (beyond the year immediately following the original nomination), a new nomination package must be submitted. The Executive Director will contact nominators via email prior to 30 September to confirm willingness for reconsideration of a package for a second year.

The Board of Directors will select the recipient of the Medal from among the one to three nominees provided to the Board from the Reid Subcommittee. The HC may review the procedures and/or act in an advisory capacity to the subcommittee. The HC, the SSA Board and staff should keep names of nominees and nomination materials confidential.

Nominations should be sent to the SSA Secretary by 30 September. Electronic submissions should be e-mailed in .TXT, .PDF or .DOC files to awards@seismosoc.org.

Questions may be directed to the Chair of the Honors Committee, Heather DeShon (hdeshon@smu.edu). Please list Reid Medal – Question as the subject line. 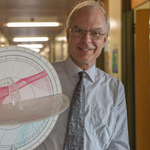 Brian L. N. Kennett, emeritus professor of seismology at the Australian National University, is the recipient of the 2023 Harry Fielding Reid Medal.

He is perhaps best well known for his role in developing two spherically symmetric reference Earth models, IASP91 and AK135, which markedly improved body wave travel time calculations compared to earlier models and led to a better characterization of the deep Earth, especially the core.

These two models “have become standard reference models for global body wave tomography and are now used in major international agencies for earthquake location,” said Thorne Lay, Distinguished Professor of Earth and Planetary Sciences at the University of California, Santa Cruz, who nominated Kennett for the Reid Medal.