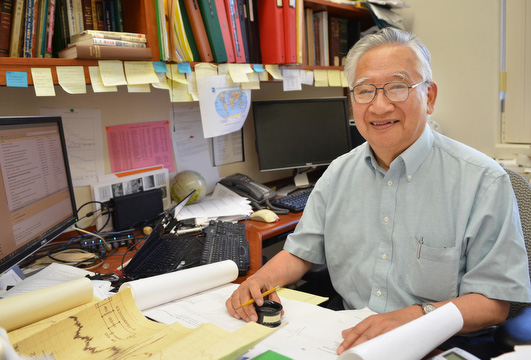 It takes a lot to impress the brainpower assembled at a place like Caltech, but Emeritus Professor Hiroo Kanamori regularly had the denizens of the Seismological Laboratory feeling inspired—and maybe just a little bit envious.

“Perhaps the most enduring observation I have about Hiroo is that he can make complex problems look easy,” said Thomas Heaton, director of the Earthquake Engineering Research Laboratory at Caltech. “He likes to assemble lots of information and then rearrange it so that it makes sense. He is especially talented at asking the most perceptive questions that lead to a deeper understanding.” 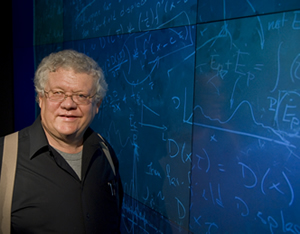 “Hiroo Kanamori has been a great mentor to several generations of earth scientists. It’s difficult to capture his contributions in a few short comments, because he is actually a very complex human being. But I would say that Hiroo is especially courageous when it comes to the problems that he chooses to work on. He especially delights in problems that promise to improve the overall security of society, and I believe that this is reflected in his decision to spend so much of his time on developing seismic warning systems and tsunami warning systems. He also is very interested in understanding what will happen to our cities and skyscrapers when we are inevitably attacked by a great urban earthquake. Of course, I share Hiroo’s interest in many of these problems, and it’s no wonder that I would tell you that he has been a key mentor to me and my students.”
—Thomas Heaton, director of the Earthquake Engineering Research Laboratory at Caltech.

“We are often amazed at how he can attack so many problems so efficiently and so effectively. This gives those around him the hope that they, too, will be able to see the true structure of complex problems. Sometimes, this can also be discouraging,” Heaton added. “I remember many times that Hiroo would complain at coffee break, ‘It took me all weekend to write this paper, I don’t know why I am so slow.’ All the rest of us could do was to groan in response.”

As a researcher, Kanamori has had an unquestionable impact on the science of seismology. His groundbreaking research on the physics of massive earthquakes, the physics of the long-term crustal processes behind seismic events, and real-time earthquake hazard monitoring mark him as one of the world’s leading geophysicists. To the public, he may be best known with Caltech researcher Thomas C. Hanks (now a seismologist at the U.S. Geological Survey) as the developer of the moment magnitude scale for measuring the relative strength of earthquakes, which expanded the Richter magnitude scale in the 1970s.

But it is his role as a mentor and guide in the professional development of hundreds of students and colleagues that is celebrated with the Seismological Society of America’s Kanamori Fund. The fund is dedicated to the professional development of students, seismologists and earthquake engineers, supporting everything from career development seminars at the SSA Annual Meeting to travel grants for national and international conferences. 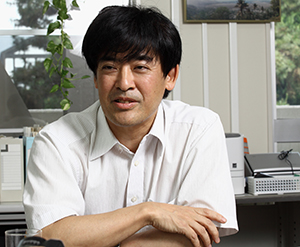 “My favorite phrase that Hiroo Kanamori often uses is ‘Of course, anything can happen.’ With such an open attitude, Hiroo is always exploring seismic data and revealing exciting aspects of seismology. When I was at the USGS in Pasadena, a casual comment or looking at an interesting figure during our frequent conversations sometimes led to new discoveries and sometimes to a dead end. In either case, there was something be learned. It was Hiroo’s genuine interest and enthusiasm over such a broad range of topics that always kept me coming back for more.”—Jim Mori, Kyoto University

Kanamori said that opportunities such as these, particularly the chance to travel and work with leading scientists, were important in his own professional development. At the University of Japan, where he received his Ph.D. in 1964, he worked with well-known Japanese scientists Chuji Tsuboi on engineering projects and Hitoshi Takeuchi on seismological research, along with American geophysicist Charles Hewitt Dix when Dix visited the University of Tokyo.

It was Dix who encouraged Kanamori to come to the U.S. for the first time, where Kanamori recalled the “really wonderful” atmosphere created by researchers such as former Caltech Seismological Laboratory directors Frank Press and Don Anderson when Kanamori spent a year as a postdoctoral fellow at Caltech in 1965.

“Frank had already left when I came to Caltech, but his philosophy of treating graduate students as professional colleagues rather than just students had been inherited by Don. This was the kind of leadership that didn’t force others to work on specific projects, but to build an exciting and stimulating research environment while the leader himself is working on research, rather than just management,” Kanamori said.

Kanamori carried on this tradition when he came to Caltech to stay in 1972 and as director of the Seismological Laboratory from 1990 to 1998. Seth Stein, a Kanamori student at Caltech in the 1970s, is one of the many researchers who were profoundly influenced by the distinguished geophysicist, right from the start. 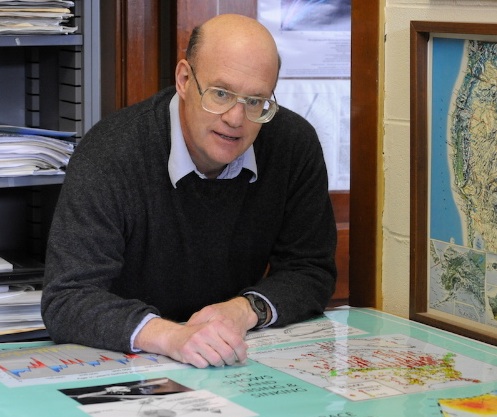 “Hiroo was incredibly generous with his time. You could ask him about anything and you would get a very thoughtful and intelligent answer. Hiroo would take everyone who talked to him seriously, from a first-year student on up. My first year at Caltech I found a mistake in one of his major computer programs, and he did not blow me off. He dropped everything and checked it very carefully, and said, ’you’re right, but it doesn’t affect our results.‘ He was right, of course. “Whenever the issue of scientific integrity comes up, I always tell people that story. I was a first year grad student, this guy is a world-class seismologist, and his immediate reaction was to get to the bottom of the problem. No defense, no blowing me off. He really is a model to those of us in any scientific field.”—Seth Stein, Northwestern University

“When I got to Caltech, it was the height of the earthquake prediction phase, when people were telling us we would be able to predict earthquakes within five years, and such,” recalled Stein, the Deering Professor of Geological Sciences at Northwestern University. “And Hiroo didn’t believe it, and he was very honest about it. I’m sure this story has gone around a few times, but I remember that Hiroo said it’s really hard to predict earthquakes—especially before they happen.”

It’s a funny line, of course, but Stein thinks that the joke is a revealing one, underscoring the kind of scientist Kanamori is. “I learned that what he had was a deep and healthy skepticism that world class scientists have,” he said. “I thought he was really good at not being influenced by conventional wisdom, and telling us not to be as well. He is a very independent thinker, and that is something that the best of his students got from him.”

Some of that independent thought began with Kanamori’s childhood in Japan at the end of World War II, when he taught himself to build motors and transformers from the war’s rubble. The complex programming and algorithms he uses in his work now have come a long way since then, but he hopes that the SSA fund in his honor will help students with similarly ambitious career plans. “Because of the tight funding situation these days, young scientists tend to be locked in ongoing projects,” he explained. “Of course, these ongoing projects can be important, but students do not seem to have time and opportunity to explore interesting and exciting projects as they come along somewhat unexpectedly.”

For some of Kanamori’s students, he was the unexpected element that helped to launch their careers. “I think my short anecdote about Hiroo is pretty simple,” said UC Santa Cruz seismologist Emily Brodsky, when asked about Kanamori’s influence on her. “I arrived as a graduate student at Caltech swearing that I would do anything geophysical other than seismology. And then I met Hiroo. He was just so much fun to work with that I had to work on earthquakes. So it is entirely his fault that I am a seismologist.”

You can help us have a career-changing impact on a seismologist with your donation this fall. Our ability to advance seismology depends on your support of the Kanamori and other SSA funds.