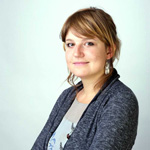 Alice-Agnes Gabriel has been honored with the  Charles F. Richter Early Career Award for her innovative research in earthquake rupture dynamics and tsunami genesis, among other topics, using physics-based models and high-performance computing.

Gabriel, an assistant professor at the Institute of Geophysics at Ludwig-Maximilians-Universität München, is best known for her prolific research in earthquake physics, using high-performance computing to simulate large earthquakes. Her computational simulations are notable for their inclusion of complex rock responses and 3D fault geometry provided by real-world geophysical and geological investigations. In particular, her studies have focused on the influence of off-fault rock deformation and fault complexities such as roughness and segmentation on rupture properties.

Her simulations of the 2004 Sumatra earthquake and tsunami, the 2016 Kaikoura and the 2018 Sulawesi earthquakes, addressing the growth and seismic radiation of earthquakes under complex fault conditions, “have broad implications for seismic and tsunami hazard assessments,” said Martin Mai of the King Abdullah University of Science and Technology, who nominated Gabriel for the award.

Gabriel is also known for her work in developing and expanding SeisSol, the most advanced open-source software package for earthquake source dynamics and seismic wave propagation. Gabriel and her students have collaborated with applied mathematicians and computer scientists to use SeisSol in computations that zero in on the small-scale processes taking place during rupture of large earthquakes.

“By making SeisSol accessible to the whole community, Alice is enabling a new generation of computational earthquake dynamics studies seamlessly integrated into multi-disciplinary studies in seismology and tectonics,” Mai said.

For her extensive work on SeisSol and numerical modeling, Gabriel has been recognized for her outstanding work within the high-performance computing community as well as the seismological field. Among other honors, she was the 2020 PRACE Ada Lovelace Award for High Performance Computing recipient.

The massive scale of her computational experiments has also made Gabriel a leader within large-scale collaborative research projects across Europe. She serves as a principal investigator for the Centre of Excellence for Exascale in Solid Earth (ChEESE), a project to integrate supercomputing centers and Earth science modeling and to prepare researchers for exascale computing in this research realm. Exascale computing refers to computers capable of performing at least one quintillion calculations per second.

“Receiving this award is an incredible honor, and it is an even greater honor to be placed in a row with the inspiring past awardees contributing to advance seismology and the understanding of earthquakes for the benefit of society,” said Gabriel. “In my personal view, being honored this year spotlights interdisciplinary research, from physics-based modeling to integrating multi-scale observations to supercomputing, as an important part of our seismological community.”

“I would like to express my sincerest gratitude to the nomination committee and my team at LMU, my collaborators in Earth science and in computer science specifically at the Technical University Munich and funding agencies without whom this research would not be possible,” she added.

Gabriel received her bachelor’s and master’s degree in physics from Technical University Dresden, Germany, in 2008, and her Ph.D. in geophysics from ETH Zurich, Switzerland, in 2013.