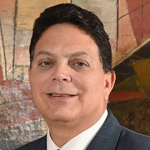 José A. Martinez-Cruzado, professor of the civil engineering and surveying department at the University of Puerto Rico at Mayagüez is the recipient of the 2023 Bruce Bolt Medal.

Martinez-Cruzado has been a leader in earthquake engineering in Puerto Rico and the Caribbean region for three decades. As the director of the Puerto Rico Strong Motion Program, he has focused on the development of a strong motion network in Puerto Rico, the British Virgin Islands, the U.S. Virgin Islands, and the Dominican Republic, and on seismic arrays in dams, buildings, and bridges. He has also worked on the design and rehabilitation of reinforced concrete structures in regions with high seismic risk.

A Ph.D. student of Bolt’s at the University of California, Berkeley, Martinez-Cruzado returned to Puerto Rico after receiving his degree to help expand and modernize its strong motion network and promote seismic safety in the Caribbean region.