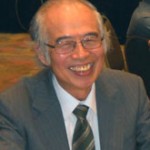 Kojiro Irikura has made an enormous contribution to the analysis and sharing of strong-motion earthquake data throughout his career in Japan. During his career at the Disaster Prevention Research Institute of Kyoto University, Irikura, authored nearly 200 publications, supervised more than 30 students in advanced degrees and became a fixture at international conferences and meetings. For the past decade, he has also served as a member of the national committees that decide on steps to be taken to mitigate the effects of earthquakes in Japan. Those decisions often trickle down to other countries wrestling with mitigating earthquake risk.

The two best networks in the world for recording strong motions (K-NET and KiK-net) are both in Japan. Irikura’s leadership in the construction and operation of the CEORKA (Committee of Earthquake Observation and Research in the Kansai Area) network was the impetus for both. The CEORKA network was deployed just in time to record the 1995 Kobe earthquake. Within one and a half years of the Kobe earthquake, the National Research Institute for Earth Science and Disaster Prevention (NIED) deployed the K-NET (Kyoshin Net). NIED freely distributed the data on the Internet as was the policy of CEORKA, and Irikura was behind this decision. This helped create the culture of sharing that has characterized Japanese seismological networks ever since. As Chair of the Committee on Strong Ground Motion of the Seismological Society of Japan, Irikura recommended the design for KiK-net that includes collocated borehole and surface instruments.

Irikura is the world’s foremost proponent of the use of the summation of empirical Green’s functions (EGF) to simulate strong motion from large magnitude earthquakes. Realizing that EGFs are not always available, Irikura and his colleagues pioneered the development of the hybrid method for simulating strong ground motion. In this method the low frequency ground motion is computed numerically knowing the basic 3D structure of the medium, while the high frequency ground motion is calculated using a stochastic method. Matched filters are used to combine the low and high frequency contributions to produce broadband simulated ground motion time histories.

Irikura has also developed robust methods of estimating site effects including basin effects and nonlinearity. One of the most critical results comes from analysis of the Port Island borehole records of the Kobe earthquake. He used immediate aftershocks to show that the soil recovered from strong nonlinearity quickly – in more than three hours but less than 24 hours. The Prime Minister of Japan twice recognized Irikura for his contributions to the seismic safety of Japan. He was honored as a Disaster Prevention Contributor and Safety Contributor by the Prime Minister, and as a Nuclear Safety Contributor by the Minister of Economy, Trade and Industry. Irikura was also President of the Seismological Society of Japan and President of the Japan Association for Earthquake Engineering. Many of his students are now university professors in Japan, Turkey, Mexico and Costa Rica. In addition to his work in Japan, Irikura also helped implement strong motion networks in Mexico.

Irikura was presented with his award at SSA’s 2011 annual meeting in Memphis, Tennessee.