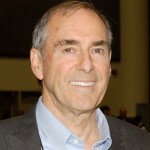 The Seismological Society of America (SSA) honored seismologist Randall White for his scientific leadership in response to volcanic eruptions, both saving lives and sharing his techniques of eruptions forecasting that are now in use at volcano observatories around the world. SSA awarded White with the Frank Press Public Service Award on April 17 during its annual meeting, April 17-19 in Salt Lake City, Utah.

The Frank Press Public Service Award recognizes outstanding work that serves the profession of seismology or the advancement of public safety or public information relating to seismology.

For more than 35 years, White has served the public in the U.S. and overseas through his work as a volcano and tectonic seismologist. Having worked for the U.S. Geological Survey (USGS) since 1974, White has served since 1991 as a seismologist with the Volcano Disaster Assistance Program (VDAP), which provides assistance to local and foreign governments during developing volcanic crises. Following the disastrous eruption of Nevado del Ruiz volcano in Colombia in 1985, the USGS and the U.S. Office of Foreign Disaster Assistance developed VDAP to respond to volcanic crises around the world, with the primary goal of reducing fatalities and economic losses in the affected region.

“Randy White is recognized internationally as the best seismologist to have at a volcano crisis when an accurate and timely analysis of the likelihood and magnitude of an eruption is of paramount importance,” said David Hill, scientist emeritus with the USGS. “More than any other individual, White has pioneered the science of operational eruptions forecasting and prediction.”

White has extensive experience from his involvement with volcano crises around the world. Using seismic data he has accurately predicted more than 60 volcanic crises at more than 30 volcanoes throughout Central and South America, Africa, southeast Asia, Kamchatka and the United States. He recognized the characteristic patterns and frequencies of earthquakes that commonly precede eruptions, leading to simple forecasting tools that can be maintained in environments with limited technology.

In addition to consultations usually on site during crises, White has also sought to teach his colleagues from more than 20 observatories in Latin America, Africa and southeast Asia about the patterns and data sets that are the foundation for his forecasts, building local scientific capacity and encouraging collaboration among the volcano observatories.

White has contributed to understanding regional tectonics through his work on the upper crustal seismology of Central America, through focused studies of individual upper- crustal earthquakes such as the Guatemala earthquake of 1816, the San Salvador earthquake of 1986 and the Loma Prieta earthquake of 1989. His work and commitment to public service led him to help establish national seismic observatories in Guatemala, El Salvador and Nicaragua, and he has helped establish or greatly expand seismic and/or volcano observatories in Indonesia, Papua New Guinea, Philippines, Mariana Islands, Colombia, Ecuador and Chile.