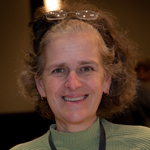 For her effective communication of science to the public and her work to establish and improve earthquake monitoring and hazard assessment worldwide, SSA honors Susan Hough with the 2023 Frank Press Public Service Award.

Hough, a geophysicist and ground motions task leader at the U.S. Geological Survey, will receive the Press Award at the 2023 SSA Annual Meeting.

In her nomination of Hough for the award, USGS research geophysicist Morgan Page noted the multiple channels of communication that Hough has used during her career to share science, including newspapers, magazines, websites, television, and radio. Hough maintains an active Twitter account (@SeismoSue) that often provides quick information and context for earthquakes around the world as they happen.

“In her books, not only does Sue distill complex scientific information in a clear and intelligible form for the general public, she layers it with history, context, and color – and her excitement for the scientific enterprise is contagious throughout,” said Page.

“Because of her expertise and ability to simply explain complex concepts,” Page added, “the media routinely specifically requests her for interviews.”

Not content to work only within the United States, Hough has also spent her career leading Office of Foreign Disaster (OFDA)—now part of the Bureau for Humanitarian Assistance– and U.S. Agency for International Development (USAID)-supported projects responding to earthquakes around the world. She has helped to deploy immediate seismic monitoring, to train the next generation of earthquake scientists and to build scientific capacity in developing countries such as Haiti, Nepal and Burma (Myanmar).

Following the 2010 Haiti earthquake, for example, Hough worked to train researchers at the Haitian Bureau of Mines and Energy (BME) in seismometer installation and operation. The BME now independently maintains the first-ever national seismic network in Haiti and has an active earthquake outreach program with schools, public officials, and the media, partnering with the Haitian Faculté Des Sciences (FDS). The U.S. Geological Survey, with funding from USAID, continues to provide support for the network.

In their commendation for Hough, the Press Award committee noted that her “commitment to equity, diversity, and inclusion is manifest in her willingness to work with people at all levels of expertise across the globe to further their understanding of earthquakes.”

In support of the award, many of her colleagues spoke of Hough’s dedication to on-the-ground organizing and direct engagement with government and public officials in earthquake zones, winning the trust of the public and providing a roadmap for both immediate and future hazard assessment and resiliency.