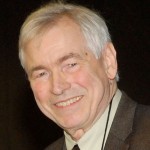 The Seismological Society of America (SSA) presented its highest honor, the Harry Fielding Reid Medal, to James R. Rice, the Mallinckrodt Professor of Engineering Sciences and Geophysics at Harvard University, at its annual meeting April 17-19 in Salt Lake City.

First awarded in 1975, the Harry Fielding Reid Medal is awarded for outstanding contributions in seismology and earthquake engineering.

A prolific and influential researcher in fracture mechanics, Rice has made seminal contributions to numerous fields related to earthquake and fault mechanics over a span of 40 years, and his research has integrated theory, experiment and observations into a comprehensible explanation for how an earthquake might evolve. His contributions have defined and set the standards for many frontiers of research.

“His research opened up new productive fields of investigations, while demonstrating how careful, rigorous mechanics can address seemingly intractable problems,” said Ralph J. Archuleta, professor and former chair of the Department of Earth Science at University of California, Santa Barbara and former recipient of the Reid Medal. “He is synonymous with elegant, creative and leading edge theory on fracture mechanics and its application to earthquake processes.” Rice addresses problems in the theoretical mechanics of solids and fluids — that is, problems of stressing, deformation, fracture and flow — as they arise in seismology, tectonophysics and surficial geologic processes and in civil/environmental engineering hydrology and geomechanics. His earthquake studies focus on the nucleation of rupture, thermo- and hydro-mechanical weakening of fault zones during seismic slip, fracture propagation through branched and offset fault systems, tsunami generation and propagation, and relations among stressing, seismicity and deformation in or near continental and subduction fault systems, including the physics of aseismic deformation transients.