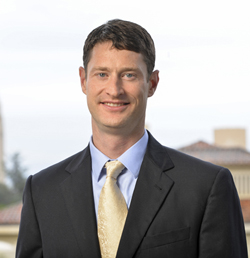 Jack Baker’s research is at the forefront of the interface between earthquake seismology and earthquake engineering, focusing on the use of probabilistic and statistical tools for modeling of extreme loads on structures. At Stanford, he has worked on projects involving risk to spatially distributed systems, earthquake ground motion characterization, and predictions of soil failure from earthquakes, among other topics.

He is the director of the Stanford Urban Resilience Initiative, which applies engineering analyses to social impact and human behavior in the context of disasters and extreme events. Baker also has industry experience in seismic hazard assessment, construction management, and modeling of catastrophic losses for insurance companies, in part as co-founder of Haselton Baker Risk Group.