18 December 2019–Alan Kafka’s career as a seismologist began with a Ph.D. studying earthquakes associated with the Caribbean plate, but “I ended up focusing on the Northeast U.S. (NEUS) for a not-very-exotic reason,” he explains. “I feel at home in the NEUS, and I didn’t want to leave.”

“What I had not expected was the NEUS earthquakes turned out to be much more interesting than I ever imagined,” says Kafka, an associate professor of earth and environmental sciences at Boston College and director of the Weston Observatory. “Unlike with plate boundary earthquakes, I don’t think anybody really knows what causes NEUS earthquakes—or intraplate earthquakes, in general. Wrestling with a challenge like that from first principles has been fascinating for me.” 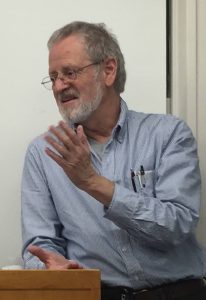 For decades, Kafka has been working with his students to develop a better understanding of intraplate earthquakes. He and his colleagues are best known for a method called “cellular seismology,” to quantify the extent to which the locations of past earthquakes map out zones where future large earthquakes are (or aren’t) likely to occur. Kafka came up with the name for the method after noticing its resemblance to a cellular phone network, where maps of circular regions around past earthquakes look like maps of cell phone towers that send out their signals within a certain radial zone.

“The idea arose from the conundrum that we don’t have a good understanding of the relationship between mapped faults and earthquakes in the NEUS or in other intraplate regions,” Kafka says. “As much as some seismologists may wish–or imagine or fantasize or pray—for it to be otherwise, nobody in the Eastern U.S. has found a ‘San Andreas Fault’ in their backyard.”

These questions were at the heart of cellular seismology when Kafka and his graduate students began exploring the idea two decades ago. They expected the relationship between locations of past and future NEUS earthquakes “to be quite random, but started seeing some structure to the pattern,” he says.

Since then, Kafka and his colleagues have expanded the method to look at intraplate and plate boundary regions, modifying it to apply to induced earthquakes near hydraulic fracture and injection wells in Oklahoma and to reservoir-induced seismicity in Armenia.

A major challenge for understanding where future NEUS earthquakes are likely to occur, Kafka says, is that the rate of earthquake activity is much lower than in places like California with its active plate boundaries. “Given the very short record of past earthquakes, it’s like trying to forecast the stock market when you only have one or two days of past data.”

Kafka considers science communication, education and outreach—he leads a long-term project that brings seismographs into schools– to be another major part of his work as a seismologist. “I was bothered by the culture in science of a dichotomy between the realms of research and education,” he says. “That was a big thing when I was younger, and although things have gotten somewhat better, that dichotomy is still here with us. I wanted to change that, and seismographs in schools came along as a way for me to get involved in fomenting change.”

Kafka and his colleagues are now working on a project using low-cost Raspberry Shake seismographs in collaboration with a community of students of all ages and citizen scientists to better monitor NEUS earthquakes. “These Raspberry Shakes are recording regional earthquakes very well, and I think I have a good start at this long-term endeavor,” he says. “But all of this pales in comparison with just wanting to be a friend and mentor to young scientists.”

Communicating about NEUS earthquake risk is another large part of Kafka’s public outreach.” Even after an NEUS earthquake happens, it’s usually hard to figure out what fault was involved,” he says. “This makes people uncomfortable, and I have often thought that they would actually be more satisfied to hear me say that ‘yes, there is a fault in your backyard and there is going to be a magnitude 8 under your house tomorrow’ than to hear me say, ‘we just don’t know.’”

“Raising awareness is important, and the earthquake hazard here is very real, but we must balance that with recognizing that there are also other hazards here that are of more apparent concern, like hurricanes, snowstorms, and floods,” he adds. “My message: Be aware and prepared, but don’t panic.”