13 July 2020–Deep long period (DLP) earthquakes occur close to the base of the crust and contain seismic waveforms with  frequencies less than 5 Hz—a phenomenon very different from the high frequency, relatively shallow tectonic activity that most people think of as an earthquake.

DLP earthquakes are most often associated with volcanoes, especially with the movement of deep magma systems and other fluids far below the volcanic summit, says Amanda Lough, an assistant professor in the Department of Biodiversity, Earth & Environmental Science at Drexel University who has made DLP earthquakes a focus of her seismic research. Volcanic seismic activity offers clues about the mechanics of eruption and may someday help researchers better understand when an eruption may occur.

“In college I was shall we say ‘eclectic’ in my interests. My undergrad mentor actually told me to pick a focus because I was too dispersed,” recalls Lough. “I really loved earthquakes and volcanoes because, heck, they’re both really cool.”

Lough thought that she was a better math than chemistry student, however, so she decided to focus on earthquakes. “I got back into looking at volcanoes because during my graduate work I found a volcano during my survey of the seismicity of Antarctica. Suddenly I realized I could combine earthquakes and volcanoes and not need to worry that much about the chemistry, which ended up being the best of both worlds.”

Fieldwork has been important throughout Lough’s career, taking her to places like Antarctica, Alaska and now her research site in Equatorial Guinea. The projects are in keeping with her lifelong love of being outdoors. “I didn’t really know what I wanted to do in college,” she says. “I knew I wanted to do something with nature or outdoors, and I was declared as ‘Natural Resources Undecided’ when I started as a freshman.”

“My dad started bugging me after my first year saying he had always wanted to take a geology course and never got the chance and that I should take one,” Lough adds. “I took the introductory geology course to basically get him to shut up, and then I was hooked.”

Lough’s first field experience was in Turkey, where she was the youngest and only female member of her team, and one of only two Americans. Her favorite field site, she says, is a toss-up between Antarctica—“duh, I get to say I’ve been to the South Pole, after all!”—and Alaska. 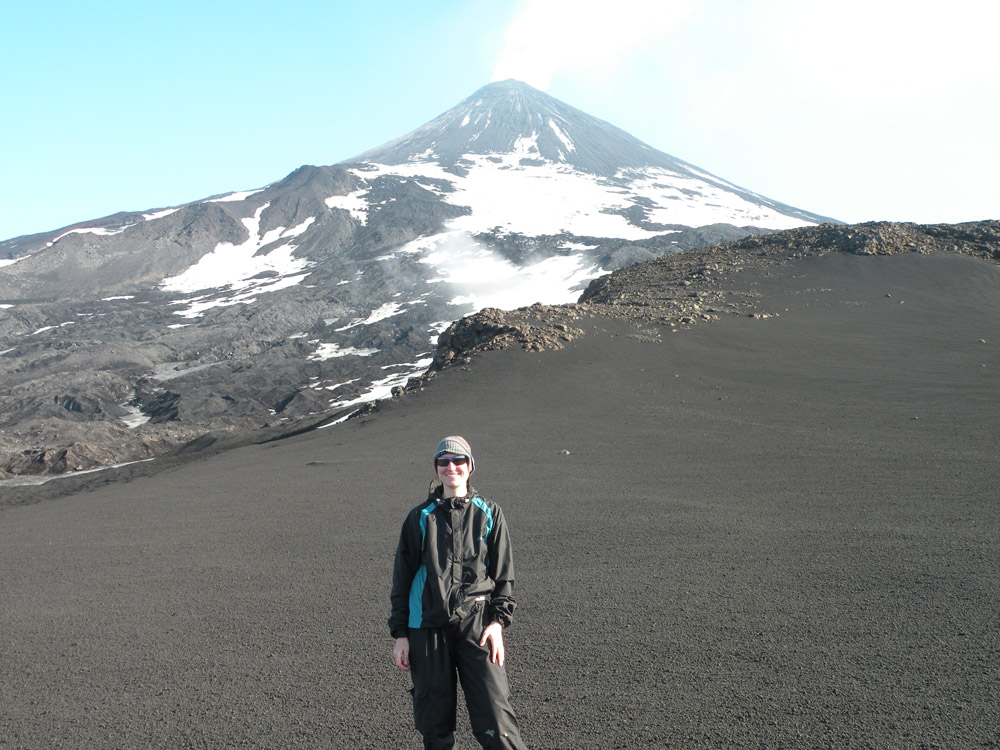 “We were installing a network on islands in the middle of the Aleutians living on a boat and taking a helicopter between the boat and the volcanoes,” Lough says. “I also was a bear guard—with a shotgun and all—when our colleagues collected samples on a different island that was populated by bears.”

Lough’s current field site is on the volcanic island of Bioko, where she and her colleagues have installed the island’s first seismic monitoring network. She spends one to two weeks in the field there each March. “All my other field sites have been either hot and dry, cold and dry, or cold and damp. This is the first time I’ve had to really contend with the adversary that is water,” she says. “I’ve found out that what works in dry or slightly damp conditions doesn’t necessarily work in a region with wet and dry—or more correctly, really wet and less wet seasons. I’m also finding that while ‘equatorial’ would make you think solar power wouldn’t be an issue, vegetation and cloud cover can be extremely challenging.”

The logistics of working on tiny and remote Bioko are daunting. Lough brings in nearly all her supplies and equipment in her luggage on an airplane, since shipping is expensive and often lost or delayed. “Luckily the new seismometers are small and not exactly light, but a set of four sensors and digitizers fits in a pelican case and is just under the maximum weight so I can check it with an overweight fee,” she says.

One of Lough’s dreams is to return to Marie Byrd Land in West Antarctica to place instruments near the volcano she and her team discovered in graduate school. “When we found the site we were using stations that were 30 or more kilometers away. In volcano seismology you really want to have your stations within a maximum of 15 kilometers of the volcano,” she explains. “I would love to get details about what’s happening at this location using a network that is specifically designed to focus on this localized question.”

Lough says she enjoys collaborating with “true” volcanologists, because her field “is one of those cases where we have to cross the disciplines and break out of the boxes, because one person really can’t be an expert in everything.”

“For example, I can speak on the events I observe at a volcano and come up with some possibilities for what’s happening mechanically, but I really need someone who is better versed in the chemistry and petrology of the volcanic system to help connect the mechanical explanation to the chemistry and physicality of the volcano,” she adds. “Together we come up with the full model that incorporates all of our observations.”