To keep her entertained in the car, her father would write math problems in a notebook for her to figure out. She also had a collection of rocks and minerals. 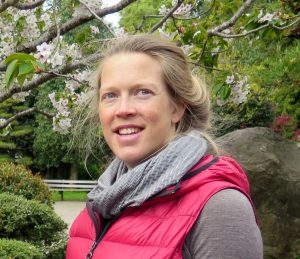 Years later, Baltay would take those interests with her to Yale, where she majored in applied mathematics after deciding a pure mathematics curriculum was too abstract for her.

“I took a bunch of classes in geology and geophysics,” says Baltay. “I didn’t like the mineralogy or geology aspects as much, but I really enjoyed seismology. It’s very observational and analytical, and obviously applies a lot of math.”

She followed seismology to Stanford for graduate school and soon became interested in ground motion models. It was here, however, that she first recognized a gap between the data-heavy models and the physical processes within the earth. Essentially, the models didn’t include enough earth and earthquake physics.

Baltay cites a separation between groups as a potential cause of the gap. “There was little communication between the seismologists who cared about the physics of the problem and the ground-motion equation developers tasked with modeling those observed motions.”

Reversing that trend is now one of her primary research goals. Based out of the USGS’s Earthquake Science Center in Menlo Park, California, Baltay spends the bulk of her time at a computer, carefully processing and analyzing seismic records to “better understand the phenomenon and physics of earthquakes.”

“Ground motion prediction equations are a key part of our hazard maps, which are really the USGS’s signature product,” Baltay explains. “Hazard maps tell you the level of ground motion you’ll likely experience, and that information goes into planning, building codes and other engineering applications.”

Current ground motion models, however, consider data in a statistical sense, and data from seemingly similar regions is often lumped together. For example, a model may be based on data from shallow crustal faults in California, Japan and Taiwan, even though the physical processes generating ground motion “might be different between those regions or even within California.” This leads to uncertainty in the models.

To reduce this uncertainty, Baltay studies the physical processes behind these data. One is stress drop, a metric describing an earthquake’s high-frequency energy that can be combined with other data to more accurately predict ground motion.

“We could put this knowledge into a model and say, if you are in this region, you should expect slightly higher or lower ground motions due to the local stress drop conditions,” she says.

Seismic velocity models, which show how fast the ground shakes in a particular area during an earthquake, could also be incorporated into ground motion predictions, according to Baltay.

“We’ve recently shown that specific paths between the earthquake and the recording station show higher or lower ground motion depending on the properties of the seismic velocity model,” says Baltay. “Again, if you know a region’s velocity model, you could improve your ground-motion prediction model.”

Her research has played an important role in USGS products and projects such as the National Seismic Hazard Map and the ShakeAlert Earthquake Early Warning System. She also works with the Southern California Earthquake Center and the Pacific Earthquake Engineering Research Center to facilitate ground motion research between seismologists and engineers.

Looking forward, Baltay sees an increase in collaboration – both from within her organization and seismology as a whole.

“One great thing about the USGS is we don’t compete for funding,” she says, “so there tends to be a very collaborative atmosphere. People are willing to share ideas and ask for input.”

She’s also surrounded by colleagues with similar interests. “It’s a lot of fun to work with them because you can have high-level conversations about the nuances of data and observations.”

“I’m excited by the gradual merging of the earthquake seismology and earthquake engineering fields,” Baltay says, but there are “still many forward strides to be made, particularly in incorporating more physics into ground-motion models and validating simulations, both for regions where data is limited and for particularly interesting sites, such as deep basins or near the edges of them.”

It’s not surprising then that her advice to graduate students and other early career researchers is to collaborate more.

“The field is small and friendly,” she says. “Talk with people. Reach out and start collaborations, ask people about their research.”

“Even if you think you have nothing to talk about – you never know what interesting topic might come up!”

Read about more SSA members in the full At Work series.