Tape, an associate professor of geophysics at University of Alaska Fairbanks, has research interests in seismic tomography—a field that broadly encompasses a wide range of techniques used to study the Earth’s interior—that relies on both pillars. 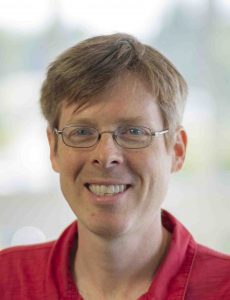 “From the standpoint of understanding the history of the Earth, I guess what drew me into seismic imaging was that we cannot understand what a seismogram is recording without full understanding of the material that it is propagating through,” Tape says.

“So for me—and I think this is true for many seismologists—it was the desire to understand how the Earth makes seismograms,” he adds. “You have to have some way to model how waves propagate within a really complicated description of the Earth.”

Tape and his colleagues have developed modeling and methodology to create improved 3D models of the Earth’s crust in California and now Alaska. His interest in tomography grew “out of a fundamental curiosity about the Earth” and the challenge of solving complex problems, rather than a lifelong interest in seismology, he says.

Growing up in Alaska, he was always aware of earthquakes “and everyone in my family is a scientist,” says Tape. “In my family, the path into science was the default.” He studied physics and geology as an undergraduate at Carleton College, then received his master’s in earth sciences at the University of Oxford on a Rhodes Scholarship. “I was sucked into seismology as a master’s student, looking at what problems there were to solve in the field,” he explains. “I’m interested in a range of ways to apply mathematics and physics to understand interesting problems.”

For his Ph.D. thesis at the California Institute of Technology, Tape developed a seismic tomography technique to create a 3D image of the southern California crust, which could be used to map features of sedimentary basins and reconstruct the tectonic history of the region. While non-specialists may know of tomography in the context of getting at the deep structural features of the Earth’s mantle and core, a shallow dip into the Earth’s crust is a large part of the field, Tape says.

As he reminds his students each semester, “the oil and gas industry spends hundreds of millions of dollars each year, and seismic imaging of the crust is one of their main tools.”

One simple way to distinguish shallow and deep tomography, Tape suggested, is to consider whether a seismic wavefield “is bouncing off things or passing through them.” The oil and gas industry, for instance, builds its maps by using the “bounce” of waves off features in the crust, while those probing deeper often use waves that pass through a medium.

As part of his work, Tape regularly creates visualizations, simulations and movies for his fellow researchers and the general public. One of his most-watched creations was a simulation of the November 30, 2018 magnitude 7.1 Anchorage earthquake. He happened to be in California at the time of the earthquake. From the time that he received an early morning phone call from his father in Fairbanks about strong shaking to a few minutes before midnight that day, Tape was on the move with his graduate student Kyle Smith, setting up the simulation on their high-performance computing cluster and rendering a movie for general viewing.

Tape isn’t directly funded to do these types of simulations, “but I know that if I can get the job done quickly, the impact will be much greater,” he said. “I feel that there’s some power in conveying to the general public what an earthquake is. A simulation provides a perspective that no seismic data can.”

Tape says he loves the work that he does, proposing and identifying projects “that are exactly what I want to work on for the most part.” His dream project “would be the perfect dataset and the challenge of some unknown region, maybe Alaska, where we simply don’t understand the seismology, and we have the opportunity to answer that question as best as possible.”

Alaska is experiencing a “golden age” of seismology, he says, due in part from the successful deployment of the US Array in the state. “We’re salivating over what kinds of discoveries are going to come out in the next five, 10, 20 years, with this unprecedented set of data in a place that’s got a ton of earthquakes and interesting structure.”

Tape will be attending SSA’s Seismic Tomography 2020 meeting this October in Toronto, Canada.