9 October 2017–USGS research geologist Carol Prentice’s career path has been globe-trotting, taking her to field sites in Northern California, the Caribbean and Mongolia, among other places. “I really love the San Andreas fault, but I guess I don’t have a favorite place to work,” Prentice says.

Prentice splits her time between fieldwork, data analysis and writing, but it is clear that she values her time in the (actual) trenches. “Most of my fieldwork has to do with identifying and mapping and characterizing active faults, so you could call me an earthquake geologist or a paleoseismologist,” she says. “My work is to help understand how often particular sections of particular faults have produced big earthquakes in the recent geologic past. We try to figure out on average how fast the faults are moving, and how much slip is typical for a big earthquake on a certain fault.”

The challenges of reading the history of past earthquakes are different at each site, she notes. In Mongolia, for instance, Prentice was part of a team studying the 1957 M8.3 Gobi Altay earthquake, where the fault and other evidence of the quake were not wiped away by rains or human traffic. “Because it was such a remote and dry area, the fault surface ruptures were well preserved for us to see, and it was also a very complex surface rupture, involving many different faults.”

In studying other faults, such as those in Northern California, “the most challenging thing has to do with the lack of sufficient funding,” she says. “It’s very difficult to get everything done that we know we need to do, and even to complete the things that we’re working on now—especially under the conditions of a decreasing federal budget.” 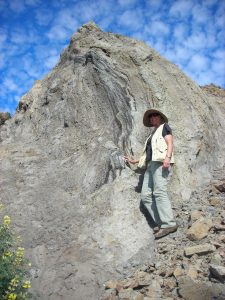 Prentice has focused on earthquake geology for the length of her career, as one of pioneering paleoseismologist Kerry Sieh’s first graduate students at Caltech, where she received her Ph.D. in 1989. The discipline has undergone many changes since then, particularly in the technologies available to researchers, Prentice notes.

“One of the things that has impacted us the most has been lidar, especially in places like Northern California and the Caribbean,” she says. “Being able to virtually strip out the vegetation and see the landscape below has been a really useful tool, helping us to map and plan where we want to trench once we’re in the field.” (Lidar refers to Light Detection and Ranging, a survey tool that can create 3D maps by measuring the distance to targets on the surface of the earth by illuminating them with laser light and measuring the reflected light with a sensor)

Another one of Prentice’s occasional tasks at USGS is to speak to the media about recent earthquakes, especially about seismic events in the Caribbean, where she has studied faults in Puerto Rico, Haiti, Trinidad,  Jamaica, and the Dominican Republic (Prentice is a program committee co-chair of the joint Seismology 2018 meeting of SSA and the Latin American and Caribbean Seismological Commission (LACSC). “After the big [M7] earthquake happened in Haiti in 2010, I was called to speak to the media about it. There are people who are much better at interacting with the press than I am, but I think it’s important; when the opportunity arises and the public’s attention is on a particular seismic event, it’s important to seize that as an educational moment,” she says.

Prentice’s “dream study” would be to delve deeply into the occurrence of blind earthquakes like the 2010 event in Haiti and the 1989 M 6.9 Loma Prieta earthquake in California. “These are big earthquakes where the fault doesn’t come all the way to the surface, and that’s very challenging for earthquake geology,” she says. “We haven’t really developed a good set of tools yet for figuring out where blind earthquakes are likely to happen or how often they’ve happened in the past, or how these earthquakes might be recorded in the landscape.”