3 November 2021–Seismic hazard analyses may use ergodic ground motion models—a sort of “average” based on global data about ground motion—or non-ergodic models, which incorporate more local and regional data on seismic source and nearby geologic structures. Having that site-specific analysis can make a big difference, as consulting seismologist Gilead Wurman found out on his first seismic analysis working with ENGEO, an international engineering and environmental consultancy.

The project was the Lucas Museum of Narrative Art, a $1 billion structure full of priceless art—some of it from filmmaker George Lucas’ private collections. The unique steel design sits on a small footprint on the University of Southern California campus, raised above the ground on base isolators to dampen its movements during an earthquake.

But the initial seismic hazard analyses for the building found that it would still sway too much in its confined space during an earthquake. The architects were considering an expensive and less attractive re-design until Wurman and his colleagues did a non-ergodic seismic hazard analysis for the site.

“We worked really long hours on that, but at the end of the day, the base motions were reduced by the amount that we needed,” Wurman recalled. After peer review of the analysis and regulator review, the original design was approved.

As a seismologist consultant working for ENGEO, Wurman works on probabilistic seismic hazard analysis projects for clients around the world building large critical structures from hospitals to high rises. For a project in New Zealand, for example, he is developing new seismic source models for the region. It can take more than a year to build these models from the scientific literature and validating them against other models, but the result is a proprietary product that ENGEO can deploy for a variety of clients across the region.

Wurman went to Caltech intending to be a physics major, but in the latter third of his freshman year he took a survey course in geology taught by David Stevenson. “The thing that really sold me was the field trip,” he recalled. The class went to the massive and mysterious Blackhawk landslide in California’s Lucerne Valley, where they were asked to come up with and defend a cause for the long runout landslide.

“It was just, here’s a bunch of hypotheses about how this could have happened, here’s the geological evidence, pick a theory and support it with evidence,” Wurman said. “What I really liked was the open-endedness of it. That got me to shift into earth science and geophysics in particular.” 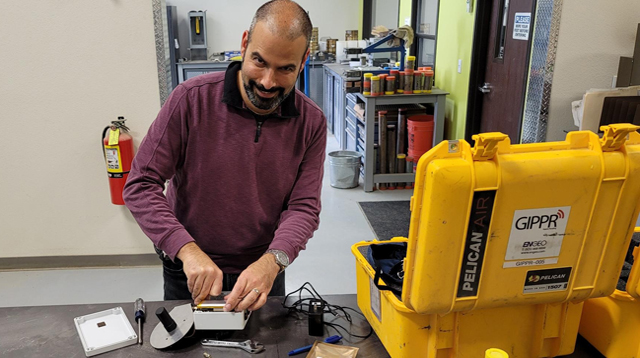 During the course of his Ph.D. work at University of California, Berkeley, “I got a greater visibility into the ins and outs of the academic career path and it just wasn’t very appealing to me,” he said. His thesis topic was about earthquake early warning. When he began work on it, “I had no interest in the engineering side of the problem—the physics were what was interesting.” But eventually he was won over by the practical side of the problem.

After first working at an earthquake early warning start-up, Wurman took a job at ENGEO, where he now works part-time. A pilot for 23 years, Wurman has also worked as a flight instructor for the past 10 years.

For those who want a professional geophysics certification, Wurman recommends some time working in the petroleum industry or specific geophysical service companies.

Wurman has found some other differences working in industry compared to academics. The engineers he works with are “more gregarious and communal, and they don’t try to solve a problem by themselves as often. It’s a more common process in engineering and consulting to ask people for solutions for problems they’ve worked on before.”

Some of those problems, unfortunately, don’t get resolved very easily. At ENGEO Wurman also worked on a project at San Francisco’s 301 Mission Street infamous “leaning” Millennium Tower. The consultants were charged with trying to figure out a way to image a clear path through the building’s 10-foot concrete slab, reinforced with steel. “We tried to do a seismic array on the floor and hit it with an active seismic source to look for the piles that were at the bottom of the foundation,” Wurman explained.

The hammering was “fun but didn’t work,” he recalled. “And I think the residents complained about the active source noise in the basement.”