20 November 2019–The terms may seem interchangeable to a layperson, but “hazard” and “risk” mean very different things in earthquake science. A seismic hazard is a natural phenomenon such as the level of ground shaking caused by an earthquake. Seismic risk, on the other hand, refers to the probability that people will incur loss or damage to their lives, health, homes and other property if they experience a seismic hazard.

The work of seismologists like Jessica Velasquez encompasses both terms. Velasquez is an earthquake source modeler at the catastrophe risk modeling company Risk Management Solutions (RMS). She defines the what, where, and how often of a region’s earthquakes to create models used to calculate seismic risk for insurers, reinsurers, financial markets and local governments, among other clients. She has built source models for earthquakes in Canada, India, Taiwan, and Central and South America. 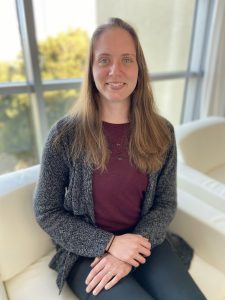 Once Velasquez and her colleagues have a grasp of a region’s earthquake characteristics, they work with ground motion modelers and geotechnical engineers to determine the level of ground motion and local site effects. “That information then goes to our civil and structural engineers to determine building and contents damage along with things like business interruption and worker’s compensation,” she explains. “Then all of it gets fed through the financial engine to come up with expected or sampled losses.”

She first learned about the catastrophe modeling industry from a friend in graduate school. “My entire motivation for studying earthquakes was to help mitigate their impact on society and individuals. Originally, I thought that was only possible through a job at the USGS,” she says. Along with earthquakes, RMS models natural catastrophes like flood, hurricane, and wildfire. They also model other catastrophes such as terrorism and cybercrime. “When I first started at RMS, actually, I was seated in a row with terrorism modelers. They would constantly be talking about things I wish no one would ever have to consider and I was so relieved when I got to move my desk to the earthquake group!” she recalls.

To create her models, Velasquez researches and complies a set of data about a region’s seismicity, including information on the tectonics of a region, historical seismicity, fault distributions and geometries, the size and depth of likely earthquakes, and “background” seismic events that could occur off of known faults, among other items.

“For the most part, we analyze data from other sources,” Velasquez says. Most information out there, however, is built for hazard modeling, which is not the same thing, so Velasquez and other risk modelers often have to re-analyze the data and assumptions to come up with alternative, more risk-applicable views. “Our models go through rigorous testing and validation through our clients and we often need to be able to cite peer-reviewed literature.” When the published information isn’t appropriate for risk, Velasquez and her colleagues write their own papers and go through the peer-review process to demonstrate that what they’ve done is not just “expert opinion.”

Earthquake source models go into several products for the insurance, reinsurance and financial market sectors. For instance, the models could be used for insurance companies to determine their policy pricing so that policies cover the widest range of purchasers while retaining the ability to pay out all claims in a catastrophic earthquake. They also help determine payout points for parametric insurance policies and insurance-linked securities, where a given parameter such as a certain magnitude earthquake or ground motion measure in a region triggers an automatic specified payment to beneficiaries.

“For instance, I have a parametric earthquake insurance policy that will deposit $10,000 into my bank account if the ground motion in my home’s census block exceeds 30 centimeters per second in peak ground velocity as determined by the USGS ShakeMap,” Velasquez explains. 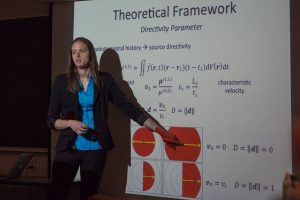 Velasquez and her colleagues also work on consulting projects, such as analyzing local risk for city or government facilities, or projects like the recently-concluded 100 Resilient Cities program. “We also work on event response, which includes generating rapid earthquake response information on recent damaging earthquakes as well as generating reports that look back at some of the more devastating earthquakes” such as a 30th anniversary report on the 1989 magnitude 6.9 Loma Prieta, California earthquake, she adds.

“There is a misconception that we need to just build our models for the worst-case scenario. Put magnitude 9+’s everywhere and call it a day,” Velasquez says. But using only worse-case scenarios can increase the cost of insurance policies to the point where insurers back out of a market and leave people without coverage, she notes, while not including the worse-case scenario could strand people with coverage if not enough money is available to pay out claims.

“We want as many people covered in case of a disaster as possible and we want those covering them to be able to do so. Finding that balance is quite challenging because the general consensus in the science is that ‘we don’t know,’ but in the end, we have to say something,” says Velasquez.

When people find out what she does for a living, they often ask about how they can be prepared for earthquake risk in their area, Velasquez says. “It is fun to be able to talk to people specifically about where they live and getting to study more and more regions, I get more familiar with local risks in different countries and I can engage more people. I love that aspect of what I do.”