17 August 2020–For decades, seismologists have contended with the background “hiss” of the Earth—seismic waves generated by the normal interaction of land, ocean and atmosphere. Their goal has been to find ways to subtract this “noise,” to concentrate on the seismicity generated by earthquakes. But one scientist’s noise is another’s signal, according to Lucia Gualtieri.

Gualtieri, an assistant professor of geophysics at Stanford University, studies this ambient seismic noise, “which represents the vast majority of the seismic signals that are recorded by seismometers worldwide,” she said. Most of this background noise comes from ocean storms driven by the wind and other perturbations of the atmosphere that transfer energy through the solid Earth, sometimes thousands of kilometers away from the storm. 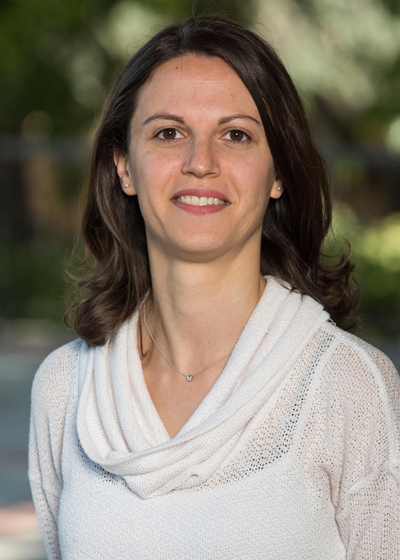 Gualtieri and others use ambient noise to learn more about the interior of our planet, using a technique called seismic tomography. “While in medical tomography physicians use X rays to scan the interior of a human body,” she explained, “in seismology we can use seismic waves to scan the Earth.” Gualtieri is a co-author and co-editor of the 2019 book Seismic Ambient Noise, along with Nori Nakata at MIT and Andreas Fichtner, a co-chair of SSA’s upcoming meeting on seismic tomography

About 15 years ago, seismologists began using ambient noise to make these scans, instead of relying solely on earthquake-generated seismic waves. “Discovering that it was possible use ubiquitous sources like these during ocean storms was a big motivation for the seismology community to push forward our knowledge on that topic,” said Gualtieri. Noise-based tomography provides a higher resolution look at the Earth’s interior in places with little seismic activity, “and allows the possibility of monitoring changes in the Earth’s properties over time,” she added.

Gualtieri and her colleagues have also used seismic signals to detect and study the dynamics of events like landslides and cyclones from a remote distance, potentially in real-time. For “mass wasting” events like landslides, “these phenomena often occur in remote regions and often go unnoticed if, for example, satellite data are not available due to adverse weather conditions,” she said.

Non-scientists are “often surprised to know that the environmental processes and ocean storms—events they are very familiar with—can generate detectable seismic waves,” said Gualtieri. But in the case of tropical cyclones, for instance, the seismic data have been helping researchers study the physics of the transfer of energy between atmosphere, ocean and solid Earth.

Although Gualtieri’s career has centered on these “non-traditional” seismic signals, she said she uses “very traditional methods and techniques that are classical in earthquake seismology. As I am a very curious person, I don’t exclude at all the possibility one day to branch out into the more ‘traditional’ seismology.”

Gualtieri grew up in central Italy in a village near the seismically active Apennine Mountains. “While I was a child, I experienced several earthquakes, like the magnitude 6 Umbria-Marche earthquake in 1997,” she said. “Events like this one left a deep impression on my mind and made me realize how powerful nature can be.” She earned her Ph.D. in geophysics as a dual degree from the Institut de Physique du Globe de Paris in France and the University of Bologna in Italy.

It’s her dream to build “a strong collaborative network” with her colleagues in ocean and atmospheric sciences to study the Earth as a whole, she said.

“Our times are the times of very specialized jobs and expertise, but this sometimes leads us to forget that Earth systems interact and continuously exchange energy,” said Gualtieri. “As seismologists, we see this every day in our seismic records.”