23 October 2019–Although he grew up in Switzerland and received his Ph.D. at the University of Basel, much of Max Suter’s career has been centered on Mexico. From the Trans-Mexican Volcanic Belt in central Mexico to the Basin and Range province of northwestern Mexico, his research has identified and characterized historical earthquakes throughout the country—with an eye to how those past events affect Mexico’s current seismic hazards. 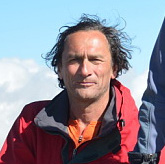 For instance, in the 1990s Suter began a project focused on the 1887 magnitude 7.5 Sonora continental earthquake. Pioneering photojournalist C.S. Fly, perhaps best known for his photos of the Old West around the time of the Tombstone, Arizona O.K. Corral gunfight, photographed the 1887 surface rupture.

“This extreme event has the longest historical normal fault surface rupture worldwide—it is more than 100 kilometers long,” Suter explains. “My detailed remapping of the surface expression of this earthquake, which is still remarkably well preserved in this arid climate, revealed that the rupture was significantly longer than previously known.”

Along with data from a seismic network installed by Raúl Castro from the Centro de Investigación Científica y de Educación Superior de Ensenada, Suter’s work indicates that the epicenter region of the 1887 earthquake has still not come to rest. “The strain energy released by large continental earthquakes can dominate the local strain energy budget for hundreds of years following the mainshock, in contrast to plate boundary seismic zones, where strain energy is dominated by tectonic loading,” says Suter.

Historical seismology can expand the scope of seismic hazard assessments, Suter says, noting that the relatively short period of instrumental earthquake records—about a century at best—“is a much shorter period than the repeat times of damaging earthquakes on continental faults, which are generally in the hundreds or even thousands of years. Most seismic energy is released in some few extreme events, and hazard assessments that do not include historical earthquakes are for that reason not very reliable.”

Earthquake hazard assessment in the western U.S., he says, could benefit from information “found in Mexican and Spanish repositories about earthquakes in the Hispanic Southwest before its annexation by the United States in the mid-19th century.”

Suter is now studying the timing and location of historical earthquakes in the Guadalajara region in west-central Mexico, where the earliest subduction zone earthquake documented in the historical sources, a probable magnitude 8.0 quake, destroyed the Pacific harbor shipyards of Puerto de la Navidad in A.D. 1563.

“Based on the plate subduction rate and modern instrumental recordings, great earthquakes along the Rivera–North America plate interface occur on average about every 50 years. However, the known historical subduction-zone earthquakes partly cluster in time,” says Suter. “For example, the towers of the cathedral in Guadalajara were toppled by a strong subduction-zone earthquake in A.D. 1806, and the reconstructed towers were already toppled again in A.D. 1818 when they were only eight years old.”

Suter’s research depends on primary historical sources, the handwritten official documents preserved in historical archives in Spain and Mexico. “In general, archival searches have become much less time-consuming over time thanks to the rapidly improving organizational level of many repositories and the rapid developments in information technology,” he says. “Most archival finding aids are now online and searchable, and many of the source documents have been digitized. I would say it now takes only about 5% of the time that it would have taken 20 years ago to extract the same amount of information from archival source documents. It’s a real quantum leap.”

After extracting the earthquake-related mentions from these sources, Suter assigns macroseismic intensities to the observations reported in the documents and maps their spatial distribution, along with quantifying the reported damage and “felt” areas of the mainshock earthquake to infer its magnitude. But to evaluate the likely source fault of each earthquake, he says, it helps to know a lot about the region’s tectonics.

“This part of a project is what interests me most. In case of a continental fault, I feel at this point the urge to field-check the geology of the source area and the morphology of the related fault scarp. After all, I’m a field geologist!” says Suter.

Suter grew up interested in a career like field geology that would allow him to spend time outdoors. “On the other hand, I was also interested in the humanities,” he says. “My dream was to open a small-town bookstore that should become a kind of intellectual meeting place. So earthquakes were not really on my mind. In a way, my present studies of historical earthquakes still reflect these early interests.”

Although he retired from the faculty of the National University of Mexico (UNAM) in 2003, he continues fieldwork in places such as Mexico and the U.S. Southwest’s Sonoran Desert, calling it “soothing,” and credits it with keeping him physically fit. “And during the archival searches, I find the interaction with historians, archivists, librarians and paleographers rewarding.”

Suter says he has plenty of data sets and manuscript drafts “that have been maturing gradually” over the course of his long career. “As it is with most researchers, I have plans for five lives.”