11 April 2018–In 1994, Natalia Ruppert arrived at the University of Alaska Fairbanks to start graduate school, uncertain whether she would stay for more than one semester. Now, Ruppert has been studying earthquakes in her adopted state and country for almost 25 years, with no plans to leave Fairbanks in the near future.

“I was born and raised in a large city, so I actually enjoy living in a smaller city like Fairbanks. I like not spending time in traffic, and not spending time commuting from place to another,” says Ruppert, the seismic network manager at the Alaska Earthquake Center.

The large city of Ruppert’s youth is Novosibirsk, a southern Siberian city with the third largest population in Russia, behind Moscow and St. Petersburg. Her high school years coincided with the arrival of glasnost and perestroika in the former Soviet Union, opening the country to the wider world. “This was a time when everything was starting to change,” she recalls. “When I went to the university [Novosibirsk State University], I met foreign students from Stanford and was part of a cultural exchange program that took me to the United States. That was part of what got me thinking about maybe going to graduate school in the U.S., just as it became possible.” 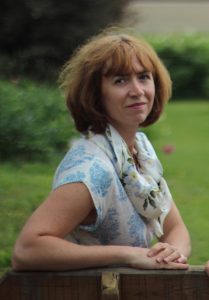 Just a few years before, Ruppert remembers, students who wanted to study abroad “had to have all sorts of connections. But at this time you just had to apply, pass all the exams, and if they accept you, you are free to go.”

Her path to a career in seismology began with a talent for math in high school. “When I graduated, I was looking into some majors that would be heavy on math, but I didn’t want to study just pure math, I wanted to do applied science,” says Ruppert. “And at the time, my big sister was dating a guy who was a geophysics professor, so I got to meet lots of geophysics students and professors, and they sort of talked me into applying for a geophysics program.”

Ruppert and her husband, who accompanied her on the Stanford exchange visit, both applied and were accepted to graduate school at Fairbanks, where she began to learn more about seismology from the late Niren Biswas, a professor at the university’s Geophysical Institute.

In her job as seismic network manager, her daily routine includes reporting on and monitoring earthquakes for scientists and the public. “That is a part of my job that doesn’t change, ever, because we always have earthquakes in Alaska,” she says. “It’s always interesting because we have so many faults and different tectonic regions.”

Ruppert is in charge of making sure that Alaska’s seismic stations, some located in very remote regions, are online and reporting data back to the earthquake center. She supervises the technicians who go into the field to perform upgrades and repairs on the stations. In the summer, she goes into the field herself to inspect some stations. “It’s hard work at times, but it is also very rewarding because these are places that I normally wouldn’t go on my own, and it gives me a chance to see the state and do some hands-on work,” she says.

Over the last three summers, she worked with Earthscope Portable Array researchers as they installed 200 temporary high quality seismic and ground shaking stations in Alaska and western Canada. The portable sites are scheduled to be removed in 2019, “but one of the things on our wish list to is to adopt or take ownership of quite a few of those sites, so we have been spending a lot of time trying to secure funding for that,” Ruppert explained.

The goal would be to convert 50 to 80 of the sites into permanent monitoring stations, especially in the north and west of the state where there have traditionally been fewer seismic stations. “That would be a great achievement for the regional network, and it would make me personally very happy,” says Ruppert.

Another significant part of Ruppert’s job is to respond to questions from the public about recent earthquakes and to handle requests from scientists to share or explain Alaskan earthquake data. After an earthquake, “people mostly want to know where it was, how big it is, and how unusual it is,” she says.

For residents living in the southern part of the state, “they feel a light earthquake at least once a week, and are more used to it and can shake it off,” says Ruppert. “But in some places where they don’t experience earthquakes very often, like the northwest, it could be 30 years since anyone there has felt an earthquake of magnitude 5 or higher. They can be completely unaware that earthquakes could occur in their village.”

In those cases, Ruppert says, she and her colleagues have sometimes traveled to remote villages to give a series of public lectures to tell residents more about earthquakes in their area.

“It’s been an interesting and rewarding career,” she notes. “I didn’t envision that I would stay for as long as I have ended up staying here, but I am grateful for the opportunity and glad that I can work here contributing to earthquake studies and where and why earthquakes occur in Alaska.”