15 April 2021–The list of Paula Koelemeijer’s study subjects would be enough to pique anyone’s interest: continent-sized blobs in the Earth’s lower mantle, mountains on its core, and … elephants.

More about the elephants later. Koelemeijer, a Royal Society University Research Fellow at Royal Holloway University of London, is a global seismologist who uses seismic waves to probe the structure of the deep Earth.

In particular, Koelemeijer studies the lower mantle, a region of the Earth with two large low-velocity structures. Seismic waves pass slower through them—hence the name—but much else about them remains a mystery. Researchers have imaged their structures consistently using seismic shear wave and compressional wave velocities, Koelemeijer said, but “we are still debating what they are, what causes the velocity anomalies and how long they have been there.” 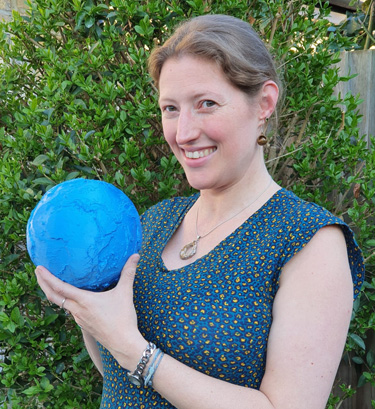 “Recently, there is some suggestion we may be converging on a hybrid model, where these structures are predominantly light with more localized dense material at their base,” Koelemeijer explained. “If more evidence points this way, that would be really exciting as we could begin to understand these structures in more detail.”

Researchers want to know more about these structures because they could affect global mantle dynamics and the heat flow out of the Earth’s core, which has implications for the planet’s magnetic field and inner core growth, she noted.

Koelemeijer is also fascinated by the topography on the Earth’s core, which has mountains and valleys of a few kilometers high. “While this is not very large compared to the radius of the core, any topography can have significant consequences, affecting outer core flow and variations in the length of day,” she said.

Core topography could also provide some clues to the nature of the lower mantle, “as we expect a relationship between the topography and the density of lower mantle features,” she added.

Seismic tomography—using seismic waves to scan the internal structure of the Earth—is one of the most powerful techniques that Koelemeijer uses in her work, but she also collaborates with mineral physicists. “Without knowing how minerals respond to increasing pressures and temperatures in the Earth, we cannot interpret our tomographic images accurately,” she said. “For example, we may simply interpret a fast seismic velocity anomaly as a cold slab, but the same seismic anomaly could also be due to a mineralogical phase transition or a change in composition.”

Koelemeijer’s husband is also a geophysicist, and lately the two of them have become interested in using 3D printing to illustrate geophysical concepts for outreach and education. The two of them have just published a paper to demonstrate how to print globes that show fields such as the Earth’s crustal thickness, as well as seismic tomography at different depths.

And finally, back to the elephants. These large mammals produce a sizable seismic signal, and Koelemeijer has been collaborating on a project to look at how these signals correlate with different elephant behaviors in Kenya. “We went into the field a few years ago, deploying seismometers only tens to hundreds of meters away from these animals, which was an amazing experience,” she said. “The hope is that if we can observe different behaviors seismically, that in the future we could remotely monitor for poaching threats.”

“I have been working as a computational seismologist, but being trained originally as a geologist, I always want to get out in the field more,” Koelemeijer said. “My dream is to combine the two and to start leading seismic deployments for research projects. Whether this is using broadband stations for deep Earth research, or using citizen science instruments to look at seismic noise, both would be great.”