When an earthquake occurs, seismic waves travel throughout the Earth. As they encounter material of different rigidity, however, they slow down or change direction. By mapping out where this happens, scientists can create images of the structures and processes within the deep Earth – a technique known as global tomography.

The problem? Earthquakes do not happen everywhere and few seismometers are deployed in the oceans and in less wealthy countries. Therefore, illumination by seismic waves is uneven or even lacking, biasing and distorting our images of the interior.

For Vedran Lekic, associate professor in the University of Maryland’s Department of Geology, finding ways to make these images clearer and quantify how distorted they are is at the center of his research.

“If we want to use a seismic image to rule out or invalidate a particular structure or process in the Earth,” says Lekic, “we have to know how confident we should be in the image in the first place. In other words, we have to put error bars on it.”

In traditional methods of global tomography, scientists divide the interior of the Earth into voxels – three-dimensional boxes or other shapes – and then observe the velocity of seismic waves in each voxel. From there, they use simulations and mathematical theory to determine velocities for the voxels. This lets them create a model that’s the best overall fit for the particular dataset they are using, but may distort or bias the images.

As principal investigator of Maryland’s Seismological Laboratory, Lekic and his colleagues work on finding alternatives that provide more accurate results. Lekic’s approach varies the velocities in each voxel, as well as the number and positions of the voxels themselves, to yield many acceptable models as opposed to one “best-fit” model. This set of models can be analyzed to determine which structures are robustly resolved, and which result from bias or distortion.

With collaborators at Maryland, the UC Santa Barbara, UC Davis and the University of Rochester, he’s also using these techniques to revisit models of the composition of the Earth’s crust, layers of viscosity in the mantle, and the internal organization of planetary bodies.

“I find these collaborations to be indispensable to my science because making progress in understanding the workings of the deep Earth requires a cross-disciplinary tool kit.”

Lekic had a less direct path to seismology than other researchers in his field. He came to the United States in 1993 as a Bosnian refugee fleeing the Yugoslav Wars. He attended Harvard University for his undergraduate degree, studying astronomy and astrophysics.

It wasn’t until an introductory geology course that his interest in the geosciences blossomed.

“That course was my first exposure to how tools of physics can be applied to understand the world around us, from the migration of sand grains along a beach, to the movement of tectonic plates across the surface and into the Earth’s interior,” he says.

From there, he was hooked. He added earth and planetary sciences as a major, worked with Göran Ekström, Meredith Nettles, and the late Adam Dziewonski in Harvard’s seismology lab and wrote his undergraduate thesis on deep earthquakes.

He carried this interest to the University of California, Berkeley, where he earned his Ph.D. in 2009 researching global tomography with his adviser Barbara Romanowicz. After a few years of postdoc work at Brown University working with Karen Fischer, Lekic landed in Maryland.

“When I started in 2012, I was the first seismologist at Maryland,” he says. “Since then, I’ve been lucky to be joined by fantastic colleagues Nicholas Schmerr and Mong-Han Huang. Our joint efforts span from global tomography to earthquake deformation to planetary seismology, making Maryland an exciting place for a seismologist to be, even without the physical excitement of earthquakes I would feel as a graduate student at Berkeley!”

…it’s important to make the public aware of what we do as scientists.

Since then, Lekic has made a name for himself as a deep Earth researcher. In 2013, he received SSA’s Charles F. Richter Early Career Award for his work in improving the understanding of Earth’s large-scale inner structure.

The following year, he was awarded a Packard Fellowship for Science and Engineering from the David and Lucile Packard Foundation. The fellowship came with $875,000 in unrestricted funds.

“I was incredibly fortunate to receive a Packard Fellowship,” he says. “It gave me the freedom to push into new research directions and pursue collaborations with colleagues at different institutions and in different fields.”

One such collaboration is with Brice Ménard, an astrophysicist at Johns Hopkins University. Together with Doyeon Kim, a postdoc in Lekic’s lab, the three are applying a novel data exploration approach – developed by Ménard to glean insights from massive astrophysical datasets – to seismic datasets.

“I find these collaborations to be indispensable to my science because making progress in understanding the workings of the deep Earth requires a cross-disciplinary tool kit,” he says.

When he’s not in the lab, most of Lekic’s days are a balancing act.

He meets with students and postdocs; writes proposals, reports and research articles; reviews articles and works on committees. He teaches, which involves preparing lectures and, as he puts it, the most dreadful activity of all: “grading.”

Another occasional aspect of his work is communicating with the media. “I think it’s important to make the public aware of what we do as scientists,” Lekic says, though sometimes media interactions are the result of breaking news.

“After Malaysian Airlines flight 370 was lost in 2014,” he recalls, “reports circulated that seismic waves were detected from its impact into the ocean. CNN brought me onto the Wolf Blitzer show to comment on the reports.”

“I explained that they were unlikely to be justified, since the seismic signature from an airplane crashing into the ocean would be nearly impossible to spot hundreds of kilometers away on land.”

Lekic is excited about the future of his research. He’s got new data analytical tools to use, while advancements in deep Earth imaging have made it easier to handle the unprecedented quantities of seismic data recordings. Additionally, progress is being made in instrumenting ocean basins, which helps fill gaps in data coverage.

“The future of deep Earth imaging is bright,” he says.

While Lekic’s focus remains on the interior of our planet, his initial passion for astronomy and astrophysics has been revitalized with NASA’s InSight mission. 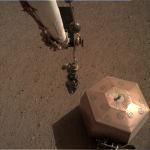 “Right now, the InSight lander is listening to Mars-quakes, precisely measuring ground vibrations on the red planet,” he says. “It’s hard to talk about seismology dreams without invoking planetary seismology, which has the potential to reveal the interiors of planets and moons, including icy satellites Europa and Enceladus.”

“Participating in missions to seismically instrument the moon, icy satellites, asteroids or even other terrestrial planets would be a dream come true.”