29 July 2022–Zoya Farajpour was born in Iran, one of the most seismically active countries in the world. Most of Iran’s major cities and towns are in the vicinity of seismic faults, she said. “The oral and written history of this country is full of massive and destructive earthquake events that have killed thousands of people.”

Farajpour’s career goal is to save people’s lives and reduce earthquake damage. Her early interest in physics and math led her to earn her doctorate in civil engineering and engineering seismology. She is now a postdoctoral fellow at The University of Memphis.

“As an engineering seismologist who has taken this journey, I am still passionate to learn new things.” she said.

Before becoming a postdoc, Farajpour worked in both academia and industry with a focus on ground motion prediction and modeling. One of her first big projects was work “on a set of raw ground-motion time histories for Iran. I developed a data catalog and a new empirical ground-motion prediction model for shallow-crustal earthquakes for Iran, which is applicable for similar tectonically active regions,” she recalled.

At the time, missing information on causative faults, event locations, and other key data was a challenge for the project, but since then Iran’s regional network has been updated and upgraded, she said. 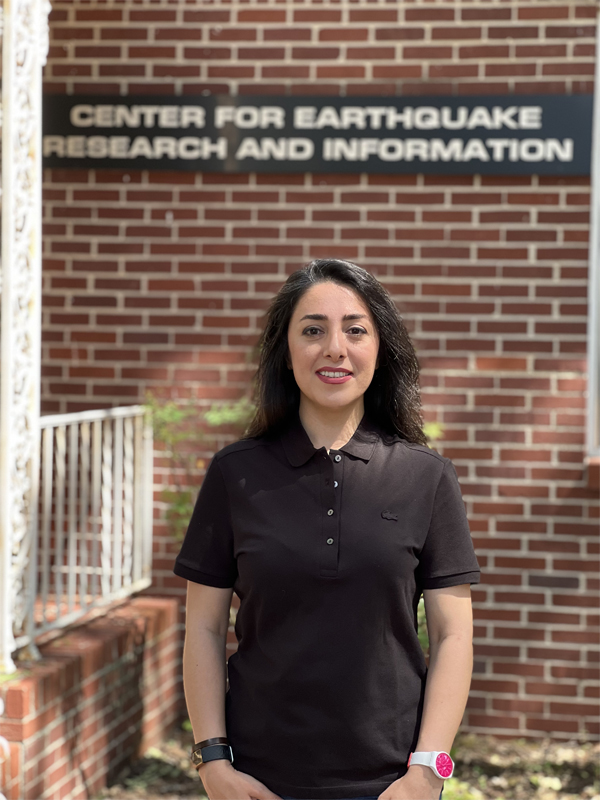 Farajpour has also worked on strong ground-motion data for central and eastern United States (CEUS), particularly for small to moderate-sized induced earthquakes. The goal was to develop a new ground-motion prediction model to use in probabilistic seismic hazard analysis for the CEUS regions to someday apply to the U.S. Geological Survey’s short-and long-term seismic hazard maps.

There are challenges to working in both academia and the private sector, she said, but both require a strong sense of responsibility. “The pace of work in industry is quite faster than in academia, and you encompass all kinds of research,” she said. “And as a scientist, you should be able to present the best results and support the business plan of your company. I personally enjoyed working in academia and industry at the time.”

Mentorship has played a big role throughout her career, she said. “I feel lucky to have mentors, family, and friends who always encouraged me. I believe every step I took to know a new thing in seismology challenged me to take another.”

“My short- and medium-term career goal is to work and collaborate with local and national scientists and engineers on New Madrid Seismic Zone problems to improve hazard and risk assessment as well as the national seismic hazard map,” Farajpour said when asked about her future plans.

She noted that she is working on a project for the national Earthquake Hazards Program to improve and reduce uncertainties in estimates of strong ground motion for the National Seismic Hazard Model and for areas with extensive sediment layers such as the Mississippi Embayment regions at the Center for Earthquake Research and Information (CERI) at the University of Memphis. “I am excited about the research results which address priority topics such as site response estimation and characterizing wave propagation and attenuation for the CEUS,” she said.

She added that as a member of the seismological community she wants to mitigate  earthquake hazard by contributing to science and identifying earthquake hazards, along with developing and using cutting-edge engineering seismology technologies. “My dream is to work on national projects which help to improve the quality of structures and provide education for people on where and how to build safer structures that will not be destroyed by moderate magnitude earthquakes.”