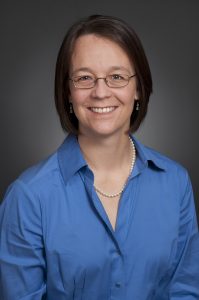 25 October 2017–The Earthquake Engineering Research Institute (EERI) and the Seismological Society of America (SSA) are pleased to announce that University of Texas at Austin Professor Ellen M. Rathje is the 2018 recipient of the William B. Joyner Lecture Award.

Rathje will deliver the Joyner Lecture at Seismology 2018, a joint meeting of SSA and the Latin American and Caribbean Seismological Commission to be held 23-26 April 2018, and at the Eleventh U.S. National Conference on Earthquake Engineering (11NCEE), to be held 25-29 June 2018.

The lecture honors the distinguished career of William B. Joyner at the U.S. Geological Survey and his abiding commitment to continuing communication and education at the interface between research findings of earthquake science and the practical realities of earthquake engineering.

Rathje is the Warren S. Bellows Centennial Professor in the Department of Civil, Architectural, and Environmental Engineering and also a Senior Research Scientist at the Bureau of Economic Geology at the University of Texas at Austin. Her research interests include seismic site response analysis, earthquake-induced landslides, field reconnaissance after earthquakes, and remote sensing of geotechnical phenomena.

She is a founding member of and current co-chair of the Geotechnical Extreme Event Reconnaissance Association (GEER) which coordinates National Science Foundation-sponsored geotechnical investigations around the world after major earthquakes and other natural disasters such as floods, to advance research and improve engineering practice. Rathje is also the Principal Investigator of the DesignSafe cyberinfrastructure project, a web-based research platform for the National Hazards Engineering Research Infrastructure (NHERI) that provides computational tools to manage and analyze critical data for natural hazards research. At the Bureau of Economic Geology at UT, Rathje is co-principal investigator for the Center for Integrated Seismicity Research and the TexNet Seismic Monitoring Program.

In her nomination for the award, Rathje was commended for her leadership across many aspects of earthquake research, as well as her impactful investigations of earthquake-induced landslides and ground failure, site response, and damage patterns for earthquakes around the world, including Haiti, New Zealand, Turkey, and the United States.

“Bill Joyner was a brilliant researcher and kind person who showed the important advancements that can come about when earthquake scientists and earthquake engineers work together. It is a privilege and an honor to be recognized for my efforts to work at this interface,” Rathje said.

Rathje served as a member of the EERI Board of Directors from 2010-2013, and was a member of the Scientific Earthquake Studies Advisory Committee of the U.S. Geological Survey from 2007-2013. She has published over 150 papers and has supervised the research of over 40 graduate students.