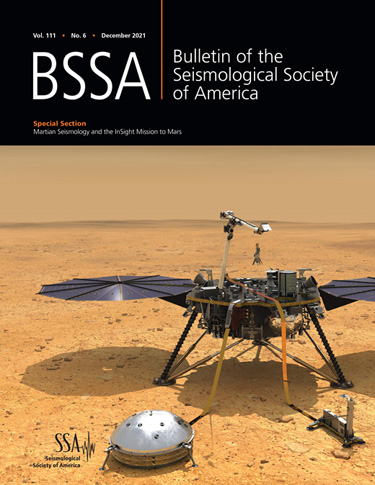 30 November 2021–About 1000 days after the Mars InSight mission deployed SEIS, the first seismometer on the red planet, researchers are analyzing new seismic data and reporting on instrument responses, using these data to plan for future planetary seismographs.

The reports in a special issue of the Bulletin of the Seismological Society of America expand our ability to interpret seismic data beyond Earth, to prepare for future planned missions to the Moon, Mars and Jupiter’s moon Titan, all of which have seismometer packages as part of their launch.

“Lessons learned from Apollo, Viking and now InSight about the design of planetary seismometers, their deployment and operation, and seismic signal processing and signal interpretation will help us perform the best seismic monitoring of these terrestrial bodies and lead to the better scientific understanding of our solar system through future missions,” special issue editors Philippe Lognonné, Sharon Kedar and Victor C. Tsai write in their introduction to the papers.

SEIS (The Seismic Experiment for Interior Structures) was deployed on Mars in November 2018 as part of NASA’s InSight mission, beginning its scientific operations in March 2019. Data gathered by the mission so far suggests that Mars is less seismically active than suspected, with the largest marsquake estimated to be magnitude 4.2.

However, the lack of big seismic events has allowed SEIS to listen in on much lower amplitude events and seismic “noise.” As of October 2020, there have been more than 400 seismic event detections for scientists to analyze, most of them high-frequency events. The quality of the seismometer and pressure sensors of the InSight mission have allowed researchers to investigate potential infrasound events as well. Researchers have also used some of the high-quality seismic events that have been recorded to better understand how the Martian crust and upper mantle scatter and attenuate seismic waves.

Several of the papers in the special issue explore the full range of recorded Martian seismic noise and determine how or if these noises relate to the operation of SEIS and other aspects of the InSight lander. Noise data analyzed from lander and instrument sources can aid in constructing the next generation of planetary seismometers and in clarifying the source of the signals they will detect. Other sources of non-marsquake noise on the planet detected by SEIS include dust devils and seasonal atmospheric changes.