5 September 2019–The eastern Pacific Ocean margin stretching from Mexico to southern Chile offers seismologists a “natural laboratory” in which to study and test ideas about the processes of subduction zones, which are associated with some of the world’s largest recorded earthquakes in the region, as well as phenomena such as volcanism and tsunami generation. 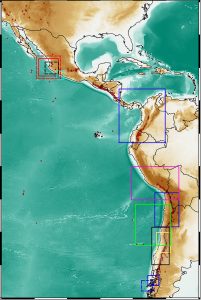 In a focus section published in the September 2019 issue of Seismological Research Letters, researchers from around the globe share what they’ve learned from an unprecedented amount of data collected in the Latin American Subduction Zone over the past two decades. In their introduction to the section, editors Carlos A. Vargas of the Universidad Nacional de Colombia at Bogota, Susan L. Beck of the University of Arizona, Marino Protti of Universidad Nacional de Costa Rica, and Jaime A. Campos of the University of Chile say the data have led to “new ideas about the spectrum of the physical processes involved in seismic rupture, geometry of subduction, triggered [seismic] events, nonvolcanic tremors and the earthquake cycle.”

Several of the papers in the section discuss past major earthquakes in Mexico and Chile, with an eye to characterizing the properties in each event that may help explain earthquake cycles and calculate future seismic hazards in the region. In their paper about the magnitude 8.8 Maule earthquake in 2010 and the magnitude 8.3 Illapel earthquake in 2015, for instance, Leonardo Aquirre and colleagues at the University of Concepcion discuss how satellite observations of crust deformation can be used to build a model of crust movement related to motion along a subducting slab during different parts of the earthquake cycle for central Chile. Analysis of the 2014 magnitude 7.3 Papanoa earthquake by Pouye Yazdi of the Universidad Politécnica de Madrid in Spain could offer valuable data to inform seismic hazard estimates in the part of the central part of the Mexican subduction zone.

Tsunamis are part of the subduction zone’s past and probable near future, and understanding the possible scenarios to generate tsunamis at this interface is important for safety planning and economic mitigation, write Mauricio Fuentes Serrano of the University of Chile and colleagues. Probability maps created from these scenarios suggest that northern Chile has a significant tsunami hazard, the researchers conclude.

Two papers take a closer look at tectonic phenomena at some of the complex plate boundaries in the zone, including an analysis of tectonic tremor along the converging boundary between the Nazca and South American plates and the Nazca, South American and Antarctic plates. Increasingly, these observations are made with the help of ocean-bottom seismometers.

Other papers in the section examine subduction zone structure where the Rivera oceanic plate dives beneath the North American plate in Mexico’s Jalisco Block and south of María Cleofas Island, as well as the complex structures below southern Peru associated with the subducting Nazca plate.