16 August 2021–Earthquakes are happening all the time inside Louisa Brotherson’s lab. Tiny ones, at least—and the strike-slip faults involved occur in Perspex plastic, not rock. Using a machine called a triaxial deformation apparatus, Brotherson can apply different pressures and stresses on the plastic to mimic the conditions that lead to earthquakes in the real world.

Brotherson, a Ph.D. student at the University of Liverpool, is an experimental seismologist. In the university’s rock deformation lab, she does frictional sliding experiments to simulate fault interfaces. “Because I am the first person in the lab to do these experiments, it’s very much test and see if it works,” she said of the process. “You have to be able to tinker and change things depending on what your experiment needs.”

The first time she heard a telltale “click” of a strike-slip fault within the apparatus, she thought the machine was breaking. “But then I realized, they’re there, I can measure them, my Ph.D. can exist!”

The machinery can be intimidating at first: “It’s like Frankenstein’s monster in here,” she joked. But the experiments have been revealing. For instance, they support the idea that the areas surrounding a fault, not just the fault interface itself, can impact an earthquake’s source properties. Rock damage around a fault can sometimes act as an energy sink, Brotherson said, absorbing some of the energy of a rupture and reducing rupture speeds.

In her experiments, she also sees features characteristic of natural earthquakes, such as foreshocks, and “and we can work out the moments of the lab-generated earthquakes, which I didn’t think I’d be able to do,” Brotherson said.

During her undergraduate years at the University of Leeds, Brotherson studied a broad range of geophysics and geology, but it was a year abroad at Western University in Canada when she became interested in seismic hazard and seismic hazard analysis. She applied for the Ph.D. program at Liverpool to work with rock deformation expert Daniel Faulkner and engineering seismologist Ben Edwards because experimental seismology would help her look at seismic hazard from a new perspective, beyond the fieldwork and computational seismology she had worked on previously. 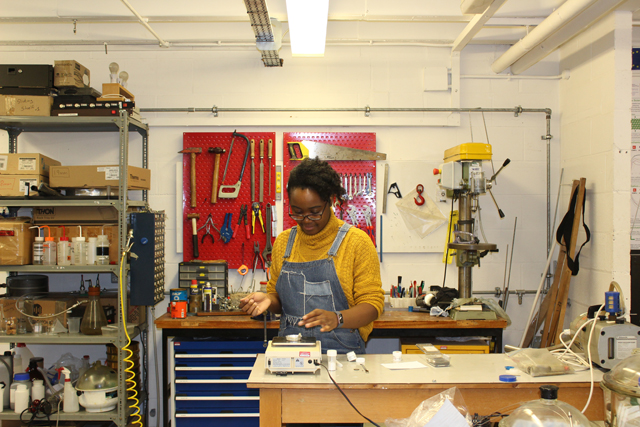 Experimental seismology, Brotherson explained, “is potentially really powerful, because you can only gauge so much for a certain extent from natural earthquakes, especially since there are so many constraints you need to think about. But we can control some of those constraints in the lab.”

She would like to do more fieldwork in the future, however, especially to take a closer look at some of the fault damage zones that have proved to be so important in her lab experiments. But she is also interested in the career possibilities in industry and policy as well.

Brotherson and her colleagues helped launch the grassroots Black in Geoscience Week, held 6-12 September 2020, on social media channels and live on Zoom and YouTube. The events focused on the experiences of different groups of Black researchers, including the global diaspora of Black scientists. The feedback from the event, which drew over 6.1 million Twitter impressions, “was overwhelmingly positive,” she said.

One of the goals of the group was to generate longer-term changes in attitudes and discussions, some which Brotherson watched happen in her own department. “It got them to rethink the way that they go about things and the way that they think about race in academia,” she said, “and just being more empathetic about the people who are already there and what we can do for the people coming up.”

Earlier this year, Brotherson interned as a researcher at The Royal Society, London, broadening her experience by working with digital technology, COVID-19, and research and innovation policy. In the position, Brotherson had a chance to exercise her communication skills to connect scientists and policymakers.

Science communication has always been an interest, she said, beginning with childhood visits to family in Jamaica and St. Kitts. “Growing up I always knew that my family was exposed to natural hazards, and I always saw it as something important just from a family perspective, communicating the importance of things like uncertainties in whether a particular earthquake was going to happen, or a volcano erupt.”

“Then going into uni and seeing the disjoint between what we were learning in academia and the skills that we’re having versus what the general public necessarily knows,” Brotherson added, “I felt like it’s kind of like a duty as a scientist to be able to communicate the basics of how things work.”