26 January 2018–Kevin Milner was studying computer programming and 3D animation at the University of Southern California as an undergraduate when he took a sophomore-year internship with the Southern California Earthquake Center (SCEC). SCEC was looking for help with 3D visualization software, “but I didn’t really know anything about earthquakes,” he recalled. “I grew up in Santa Barbara, and I sort of felt the Northridge earthquake, but it was really never top of my mind.”

Ten years later as a programmer at SCEC, Milner is working toward his Ph.D. in geophysics and has found a happy balance as a seismologist, computer scientist and musician. Like many of his peers, Milner could have gone to work for Google or Microsoft or another large tech company. “But I really enjoy the societal benefit aspect of my job, that I’m not just working on making some business more money,” he said. “The models that I work on get used and make their way into the building code to help improve resiliency, and ultimately benefit the public.” 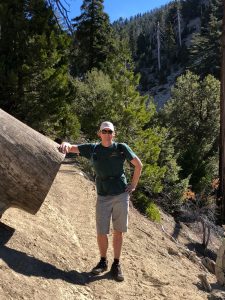 In the tech world, “you might only contribute one small piece to one big machine and not have any control over design,” he added. “In these smaller research environments, you can really contribute to and shape an entire project.”

Milner thinks programming skills should become a key part of all scientists’ graduate training. “It helps to sift through the data,” he said. “For the other graduate students I know, much of the work is figuring out how to implement the science they have in their heads, so programming skills would be very beneficial.”

Milner works primarily on earthquake forecast modeling, especially through SCEC’s work on the Uniform California Earthquake Rupture Forecast (UCERF), which provides California’s official estimates of the likelihood and severity of damaging earthquake ruptures. UCERF forecasts these ruptures for timescales ranging from an hour to up to a century. (An overview of the latest UCERF model, co-authored by Milner, appeared this past July in Seismological Research Letters.)

When he first began working with seismologists such as USC’s Tom Jordan and Ned Field of the USGS, the researchers would ask for software to study a problem, and “teach me all of the requisite science and math, and I would work on programming things in an elegant way,” Milner noted. But as his own expertise in geophysics has grown, “it’s been really fun to transition from having them say ‘here’s how you do this thing’ to coming up with a solution to a problem on my own.”

His dissertation work centers on physics-based earthquake simulators, which differ from the type of earthquake forecasting done through the UCERF models. “With the UCERF models, we’re basically trying to come up with a forecast that matches all the data we have: all the observations on earthquake rates, paleoseismic data, GPS data,” he said.

“The physics-based models take a different, simulation-based approach, that incorporates all the physical laws of earthquakes that we can understand and approximate,” Milner explained. Researchers can then “mine” the data contained in the collection of simulated earthquakes to create forecasts for real-life earthquakes in California, he noted.

He hopes that these and other models will produce more useful time-dependent forecasts in the future. “For instance, if a magnitude 6 happens right next to the San Andreas, that increases the probability of a large earthquake on the San Andreas. In that type of scenario, we would want to have some sort of short-term response, to tell people what they might expect within hours or days, but we don’t currently have that capacity online and automated.”

Running the models to produce the kind of on-demand earthquake forecasts needed under the San Andreas scenario would be possible with more researchers and more computing power, he said.“ We have the scientific capabilities to do better, but resources aren’t there yet for it.”

Earthquake forecasting in seismically active parts of the world like New Zealand and Italy interest him, Milner said, “but I really love working in California. All of these short-term models are in practice mode right now, but at some point it’s going to happen, and I want to be here on the ground when it does.”

Milner said he does sometimes get comments like “let me know when the Big One is coming” when he talks with non-scientists. Some people may think that researchers are working on a way to predict specific earthquake events, he said, “but we don’t use the term prediction. We try to carefully say ‘forecasting’ and ‘providing probabilities.'”

Milner plays pedal and lap steel guitar and spends weekend nights playing mostly country music in bars and for country-line dancing. He plays with a number of bands as a “hired gun,” he said, and has been regularly gigging for the past five years.

“One of the things that I love about my job is that I don’t always have to be in the office to do my work. I can program from home, or a coffee shop, or on the road,” he says. “Some of my recent work that I’m most proud of was done in the back of a van en route to play a big music festival in Utah.”